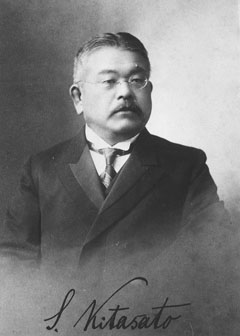 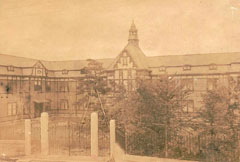 1853-1931. Bacteriologist. Kitasato entered the Tokyo Igakuko (School of Medicine) in 1875 and after graduation worked for the Interior Ministry Health Office. In 1885, he went to Germany to study under the leading expert in the study of pathogenic microbes, a man named Koch, and succeeded in the pure culture of tetanus bacillus. He also developed serotherapy and became a world-class researcher. In 1892 he established the Institute of Infectious Diseases on his return to Japan, and in 1894 he discovered the pest bacillus in Hong Kong. In 1914, he established the Kitasato Institute and made a significant contribution to the medical world by serving as the first dean of the Faculty of Medicine at Keio University and the first chairman of the Japan Medical Association.
Founded the Kitasato Institute in Shiba Shirokane with his own funds

On returning from studies in Germany, Kitasato exerted himself to establish the Institute of Infectious Diseases in Japan. Yukichi Fukuzawa, who shared Kitasato’s enthusiasm, offered him part of his home. In 1892, Japan’s first Institute of Infectious Diseases was born in the corner of Fukuzawa’s house in Shibakoen. Although Kitasato later rented land owned by the Interior Ministry in Atago-cho, Shiba Ward, the construction of the institute ran into difficulties because of opposition from nearby residents, but the institute finally moved to that location in 1894. In 1914 Kitasato, who opposed the transfer of the institute to the Ministry of Education, resigned his post and established the Kitasato Institute with his own funds in Shirogane Sanko-cho, in Shiba. The land was given to him by Yukichi Fukuzawa in 1913, and this was where Japan’s first tuberculosis special hospital, Tsukushigaoka Sanatorium, was opened.