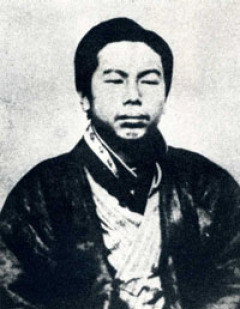 1868-1894. Poet and critic. Although Kitamura enrolled at the Tokyo Senmon Gakko (now Waseda University) aiming to become a politician, he was expelled after joining the Freedom and People’s Rights Movement. After almost a year of vigorous activities, he left the movement while he was questioning its purpose and decided to become a novelist. After he married in 1888, he published the long verse Soshu no shi (The Poem of the Prisoner) and the poetic drama Horaikyoku (The Drama of Mount Horai). He subsequently launched the magazine Bungakukai with Fujimura Shimazaki in 1893, wrote reviews such as the “Naibu Seimeiron” (Theory of Internal Life), and led the Romanticism Movement, but he committed suicide the following year. He lived for only 25 years.
Twenty?five years of life ended at his house in Shibakoen

Tokoku, who became an English teacher at the Friends Girl’s School in 1890, moved to Shibakoen with his wife, Minako. The couple, both had been baptized, frequented the Azabu Christian Church and moved around Shiba Takanawa, Azabu Tansu-machi, and Azabu Kazumi-cho. In 1893, he took over the post held by Toson Shimazaki at Meiji Girl’s School. Although he developed astute activities as a critic in the magazine Bungakukai, which he launched, his mental abnormalities gradually increased, and he stopped writing when he returned to his house in Shibakoen ,saying that his life was over. Before dawn on May 16, 1894, he hung himself in his garden, and his remains were buried in Zuisho Temple in Shiba Shirogane.