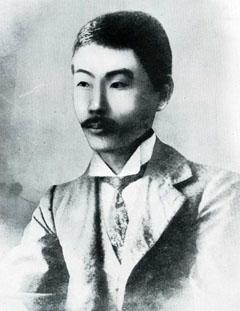 1871-1908. Poet and writer. After rising to distinction as a war correspondent in the Sino-Japanese War in 1894, he married Nobuko Sasaki and was recognized as a poet after publishing “Doppo-gin” in 1897. In the following year he wrote romantic short novels such as Musashino and Wasure enu hitobito (Unforgettable People), and in 1901 he was acclaimed the pioneer of freestyle literature with his novel Gyuniku to bareisho (Beef and Potatoes). He died at the age of 37 from tuberculosis.
The freestyle literary movement in Japan was born from the ashtrays of Ryudoken

In the late Meiji era, the Doyokai (the Saturday Club group meeting) was held by writers at Kunio Yanagita’s house in Ushigome. As the number of participants gradually grew, a restaurant called Kairakutei in Kojimachi became the meeting place, and when Kairakutei moved to Ryudomachi in Azabu and became Ryudoken, the meeting came to be known as the Ryudokai.

It is said that Japan’s freestyle literary movement was born from the ashtrays of Ryudoken, because many freestyle writers in their 20s and 30s, such as Doppo Kunikida, Katai Tayama, Ariake Kambara, Toson Shimazaki, and Kunio Yanagita, frequented the club. Kunikida’s best friend, Katai Tayama, wrote how the young writers debated on European literature, and how Kunikida used to say that they should have a great going-away party if anyone from Ryudokai decided to go to France. Kunikida’s tomb in Aoyama Reien is inscribed in Katai’s writing, “The Tomb of Doppo -Tetsuo Kunikida.”