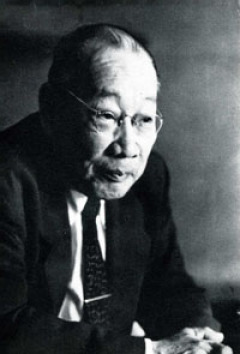 1889-1963. Playwright, writer, and actor. Kubota made his literary debut by publishing a short novel, Asagao (Morning Glory), and a play, Yugi (Game), in Mitabungaku Mita Bungaku in 1911 while attending Keio University. His full-length novels include Tsuyushiba (Dew on the grass), and Shundei (Spring Thaw). In his works, he continued to depict the joys and sorrows of ordinary people in working-class neighborhoods. He left a legacy of diverse accomplishments, such as literary section manager for Tokyo Hosokyoku (now NHK), president of the haiku magazine Shunto, and his involvement in the launch of the Bungakuza Theatre with Kunio Kishida.
Achieved significant contributions during the dawn of broadcast drama

From 1926, Kubota frequented Mt. Atago, with Masao Kume, as a temporary employee of Tokyo Hosokyoku, which began broadcasting in 1925. In 1929 he dramatized and broadcast Ichiyo Higuchi’s Jusanya (13th Night) as a radio drama. In 1931 he became the manager of the literary section on a permanent basis. During the dawn of Japan’s broadcasting culture, he exhibited his wide knowledge of literature in general and exhibited great strength in his subtle and intuitive people skills.

In 1936, he moved from Kigurezato to Shiba Mita. He worked for seven years with a radio station until 1938. He spent his last years in Akasaka and wrote a verse that reads,“Yudofu ya inochi no hate no usuakari” (In eating simmering tofu, one realizes that life is nothing but twilight in the end).