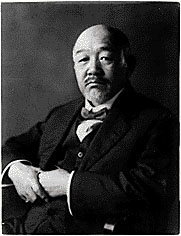 1866-1924. Painter. In 1884 Kuroda went to France to study law. He changed his major to art and began concentrating on it, studying under Raphael Collin (French painter who played an influential role in modern Japanese painting). When he returned to Japan in 1896, he formed the art group Hakubakai and became a professor at the Tokyo School of Art. His naturalistic style, which incorporated plein air techniques, became the mainstream of modern Japanese painting. He later became a member of the House of Lords and the president of the Japan Art Academy. His outstanding works include Kohan (Lakeside), Chosho (Makeup in the Morning), and Maiko (A Maiko Girl).
The father of Japan’s modern painting who spent his last years in Kogai-machi, Azabu

Kuroda was a painter and educator who created innovations in the painting world in the mid-Meiji era, and his achievements are still highly acclaimed, as well as many of the works he produced. He was adopted by his uncle, Kiyotsuna Kuroda, a high official in the early Meiji era, and moved to Tokyo at a young age. He aspired to become a painter while studying in France and brought with him the impressionistic painting style that applies a bright outside light to the painting world of Japan.

The Hakubakai Oil Painting Institute, an affiliated organization of Hakubakai that Kuroda established with Keiichiro Kume in Tameike, Akasaka, turned out many famous artists. His last work Bairin (Plum Grove), which he painted just before his death a year after he collapsed from angina, represents the garden he could see from the annex of his townhouse in Kogai-machi, Azabu. His tomb in Hase Temple in Nishiazabu was restored in 1987, and the burial accessories recovered during the restoration, such as the stone epitaph and his glasses and pipe, were given to the Minato City Local History Museum by his family.