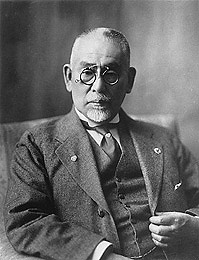 1857-1929. Politician. Goto aspired to become a doctor, and there is a story about him in 1882 when he was the director of the Aichi Prefecture Hospital in Nagoya. He once made a house visit to the politician and leader of the democratic rights movement, Taisuke Itagaki, who had been attacked in Gifu by thugs who were against the movement, even though Gifu was not under his jurisdiction and Goto had no required permission to do so.
Established the Institute of Infectious Diseases, in Shibakoen.

Just after marrying his wife, Kazuko, in 1883, he moved to Shiroyama-cho in Shiba Ward and subsequently to Azabu Zaimoku-cho, Azabu Azuma-cho, and and again to Azabu Sakurada-machi, in Minato City. In 1892 while working as the chief of the Interior Ministry Health Office, (over local objections )he established the Institute of Infectious Diseases, in Shibakoen, and (over local objections) with Shibazaburo Kitazato as its chief. Please use one or the other “over local objections” that I have inserted. If the objections were to the establishment, use only the first one. If they were to Kitazato as its chief, only the second one.) He promoted research on the prevention and treatment of infectious diseases. He is also known to have made the first greeting that launched the radio broadcast of Tokyo Hosokyoku (now NHK) as its president in 1925, from Mt. Atago. He died in 1929 and was buried next to his wife in Aoyama Reien.