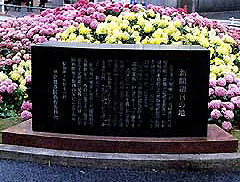 1836-1898. Industrialist. Koyasu studied Western subjects under Shozan Sakuma (a prominent scholar of Western studies) and became a translator at the Ministry of Foreign Affairs after the Meiji Restoration. In 1870 he established Japan’s first lead letterpress printing company, Nishu Co., Ltd., in Yokohama with the former First Secretary of Foreign Affairs Morimichi Motono and the interpreter Shokichi Shibata and published an English-Japanese dictionary. In 1874 he launched the Yomiuri Shimbun in Toranomon, Tokyo’s first newspaper, using the Nishu facility in Shiba, and served as its first president. He also later became the first controller of the Bank of Japan.
Tokyo’s first fully fledged newspaper was launched from Toranomon

In 1873, Nishu Co., Ltd. was moved from Yokohama to Kotohira-cho, in Shiba, and Koyasu and his colleagues began preparing for their long-awaited launch of the newspaper. He renovated the Edo manor of the former Harima Yamazaki clan and transported the printing facility from Yokohama. Because the English?language dictionary he had published in 1870 had proved that annotations in kana, which he had used, had made the dictionary easier to read and which were also well received, he produced the new newspaper also with kana annotations.

He named the newspaper the Yomiuri Shimbun by taking the first two characters from “Yomi-uri Kawaraban,” (an early form of newspaper popular during Edo and early Meiji) which was popular among commoners in the Edo era, and published the first issue on November 2, 1874. It became popular among the general public for its easy-to-read style, and in the following year its circulation had grown from 200 every other day to more than 10,000; by 1877 it had exceeded 33,400. Eventually the Yomiuri Shimbun boasted the greatest daily circulation of all newspapers in Tokyo.