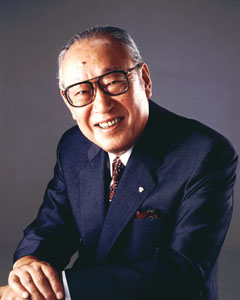 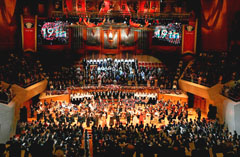 1919-1999. Industrialist. Saji was born in Osaka as the second son of Nobuharu Torii, who founded Suntory’s predecessor, Kotobukiya, but was adopted by his mother’s relatives. He joined the navy, then got a job in Kotobukiya after the war and became its president in 1961. In 1963 he changed the company name to Suntory, entered the beer business, and turned the company into a manufacturer of alcoholic and nonalcoholic beverages that represents Japan through aggressive sales and publicity activities. On the other hand, he advocated the importance of social and cultural activities by business from early on and became a pioneer in promoting corporate philanthropy by developing the Suntory Museum of Art and Suntory Hall.
Enriching people’s lives through the art museum and concert hall

In 1961, Saji, who wanted to provide a place where people could closely enjoy traditional art, built the Suntory Museum of Art in the Otemachi Palace Building. He moved the museum to the 11th floor of the Akasaka Suntory Building, in Roppongi, in 1975. The museum has always attracted attention because of its innovative program exhibitions with themes of “Everyday Beauty.” It has been temporarily closed since 2004, but is scheduled to reopen in the spring of 2007. In 1986, Saji opened the Suntory Hall in the Roppongi Arc Hills as Tokyo’s first concert-only hall. He sought the advice of the famous conductor Herbert von Karajan for its design, and its splendid acoustics and aspiring plan continue to captivate many people.