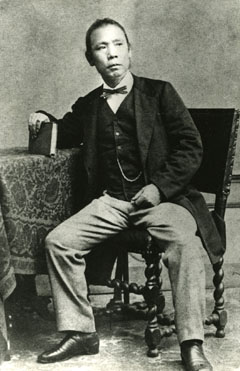 1822-1902. Samurai and politician. Sano was born into the family of the Saga clan of samurai, but was adopted by the clan’s physician, Tsunemi Sano. He studied medicine, Western studies, and chemistry, and in 1863 manufactured Japan’s first steamship as a navy investigator. After touring Europe, he devoted his efforts to establishing the navy under the new government and received appointments as Minister of Finance, President of the Senate, Privy Councilor, and Minister of Agriculture and Commerce. Hakuaisha, which was established during the Seinan War, changed its name later to the Japanese Red Cross Society, and Sano was appointed its first president and given the title of Earl.
Accomplished the establishment of an aid organization based on humanity and philanthropy

Hakuaisha was born from the Seinan War, which broke out in February 1877. Sano, who had learned about the many fatalities and casualties in this war, with his fellow official of the Senate, Yuzuru Ogyu, requested the government to establish the aid organization Hakuaisha, following the example of the Red Cross in Europe. However, his idea of “saving the enemies without prejudice” was not accepted. As such, he made an appeal directly to Prince Arisugawa, the Imperial Prince Taruhito, who was the commander of the government military. His request was accepted, and the aid activities began.