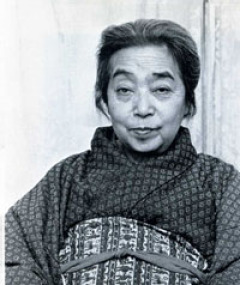 1900-1978. Writer. Studied under Naoya Shiga and published a collection of short stories called Mitsuko in 1926 as a result of Shiga’s recommendation. She put her creative activities on hold for her marriage, but three years after her divorce made a comeback with a collection of short stories called Kisha no nakade (On the Train) in 1940. After the war, she was awarded a literary award for women and a recommendation of art from the Ministry of Education for her works, including Kin no Hitsugi (Golden Coffin) and Sakura no hana (Cherry Blossoms). Although her work was far from prolific, she played an active role as a novelist whose work derived from issues based on her own life and those that were close to home.
Her susceptible girlhood spent in Akasaka became the basis of her I-novels.

Born in Azabu Mamiana-cho and raised in Akasaka. Kiku’s family was wealthy; her father, Kamekichi, manufactured and sold saddles, but he divorced her mother, Fujino,. in the year she entered Akasaka Jinjo Primary School. She subsequently had to live with three stepmothers, and although she got on well with them, she suffered the misfortunes of losing her 2nd and 3rd stepmothers to illness, in quick succession.

Having lived in a complicated family environment during her girlhood gave birth to her qualities as an I-novelist. In her short novel Yureru Yoshi, she describes the town of Akasaka where she lived until she was 11 and the separation from her birth mother. Her own married life ended after eight years, but her relationship with Naoya Shiga, whom she revered as her teacher, continued until the end of her life as a close family friend. The tombstone of the Amino family is in Aoyama Reien, where Naoya Shiga’s tombstone can also be found.