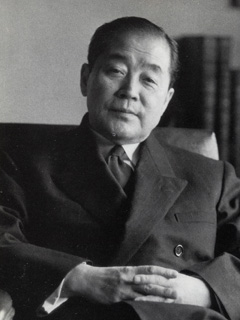 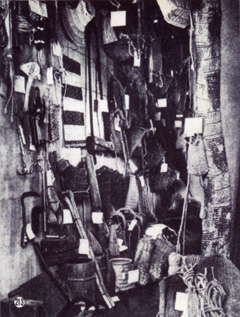 1896-1963. Industrialist. Patron of folklore. Keizo was the son of the eldest son of Eiichi Shibusawa. Although Keizo pursued his path as a business leader to take over the family business, he continued to study folklore and biology, which he had begun before World War II, and established the Attic Museum in his home by collecting articles used daily by people throughout Japan. While he served as governor of the Bank of Japan and the Minister of Finance, he also served as chairman of the Nihon Minzokugaku Kyokai (Japan Folklore Association) and of the Anthropological Society of Nippon; throughout his work in these important positions, he contributed greatly to the development of Japanese folklore.
Shibusawa’s home in Mita was the base for his folklore collection

The Shibusawa house that Eiichi Shibusawa had built in Fukasawa was moved to Mita Tsuna-machi (now 2-chome Mita) in 1909. Keizo initially set up a display shelf in the attic of a storehouse built in the back garden where he displayed fossils and taxidermies that he and his friends had collected, as well as his collection of holiday souvenirs. He later formed an arts and science club called the Attic Museum Society in 1921 and began collecting folk toys.

In the early Showa era, he started to seriously collect and study folk articles, but not toys, and by 1930 he had built a two-story timber structure on the site of the storehouse, which had been torn down, and stored a valuable collection of folk items from throughout Japan. The name Attic Museum was later changed to “Institute for the Study of Japanese Folk Culture.” It turned out many brilliant researchers, such as Tsuneichi Miyamoto, and also became the prototype of the National Museum of Ethnology established in 1974.