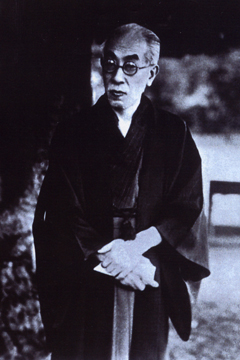 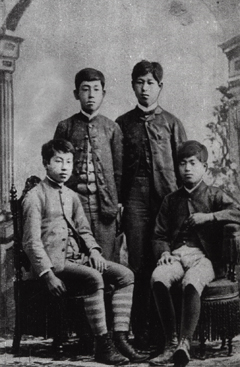 1872-1943. Writer. Born into an old established family in Magome Village (now Magome, Nakatsukawa City, Gifu Prefecture), Shimazaki moved to Tokyo to study at the age of 9. After graduating from Meiji Gakuin, he launched Bungakukai with Tokoku Kitamura and others. He initially worked as a poet, publishing “Wakanashu” (Anthology ), but when he was 34 he established his position as a novelist with the full-length novel Hakai (Destruction). He became the leading writer of naturalist literature.
The school where he opened his eyes to literature, and the house in Iikurakata-machi where he produced his masterpieces

Shimazaki, who moved to Tokyo to study in 1881, enrolled at Meiji Gakuin (now Meiji Gakuin University) after attending school at Taimei Elementary School, Mita Eigakko (now Kinjo Gakuen High School), and Kyoritsu Gakko (now Kaisei Academy). A year after enrolling, he moved into a dormitory and was baptized as a Christian shortly thereafter. Toson later wrote the book Sakura no mi no juku suru tok (When the Cherries Ripen) set in the school and he also wrote the lyrics for the school’s song.

After graduating from Meiji Gakuin, Shimazaki taught in Koji-machi Tokyo and in Shinshu, but when he was 33, he moved again to Tokyo with the half-written Hakai under his arm. The life of the Shimazaki family, which had lost its income, was hard, and his three children and wife died in succession around the time he completed Hakai. In 1913, Shimazaki went to France as if to break all past ties. When he returned home three years later, he moved around in Minato City (Shiba Nihon Enokinishi-cho, Nishikubo Sakuragawa-machi 2-banchi), and in 1913 he finally settled down at his home in Iikurakata-machi and lived there for 18 years. His outstanding work Yoakemae (Before the Dawn) was produced in this house, in which he lived longer than in any other during his lifetime.