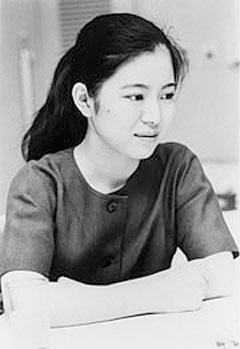 1958-2005. Researcher of Edo lifestyles and customs, manga artist, and writer. Sugiura made her debut as a manga artist in “Tsugen muro no ume” in the manga magazine Garo and went on to release in succession manga based on Edo customs and manners such as Goso (Joint Burial) and Furyu Edo Suzume (Gracious Edo Suzume) (Bunshun Manga Award). She declared her retirement as a manga artist in 1993, and her last manga piece was Hyaku Monogatari (100 Tales). For nine years from 1995, she was a regular participant on NHK’s television program Comedy: Oedo de gozaru (Comedy; This is Edo) and was popular as the expert guide who gave interesting easy-to-understand commentaries about Edo culture.
A talented woman who conveyed Edo’s stylishness to the present day

Sugiura was born in Atagoshita as the daughter of an old established kimono merchant. In her book of illustrated essays Edo Aruki-cho (Diary of Edo Walks), she writes about Mt. Atago, Shiba Shimmei, Takanawa, Akasaka Kiribatake, Akasaka Hikawa Myojin, Aoyama Onden, and Minato City. Among them, in a chapter on Isarago-machi, she writes about the culture of Edo and the temperament of its inhabitants (Edokko); “It is the ideal of an Edokko to be born in Shiba and raised in Kanda. To live in the cheery environment of Shiba in early childhood and grow up in the bustle of Kanda, the most Edo-like town, a person will surely develop a refreshingly frank, resilient, hasty, and hotheaded character”.