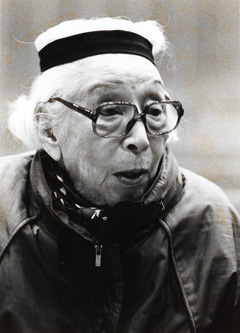 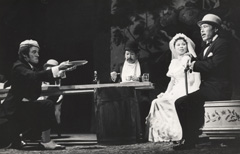 1904-1994. Actor and director. Senda left Waseda University in 1904 and participated in the establishment of the Tsukiji Shogekijo Theatre as a member of the literature club and as a performance researcher. After studying in Germany for five years, he formed the Haiyuza theatrical company in 1944. In 1949, he opened the Haiyuza Yoseijo (Haiyuza Training School), and in 1954 he opened the Haiyuza Theatre and played an active role as a leader of the postwar Shingeki (new school of drama) world. He also performed in movies, such as Jigokumon (Gate of Hell), Mori wa ikiteiru (The Forest is Alive), and Hi no ataru sakamichi (A Slope in the Sun).
Turned out many great actors from Japan’s first theater dedicated to drama

Senda formed the theatrical group Haiyuza with Sugisaku Aoyama, Eijiro Tono, Eitaro Osawa, Chieko Toyama, and Teruko Kishi, and after the war, in 1947, he built an exclusive rehearsal center in Mikawadai-cho (now 4-chome, Roppongi). Although the building was a timber structure, it was in a stylish Western style, and Haiyuza became Japan’s first theatrical group with its own rehearsal space. On the group’s 10th anniversary in 1954, it opened the Haiyuza Theatre dedicated to drama; its 401 seats included seats on a second floor.

Many stars thrived at Haiyuza and its training center under the direction and instruction of Senda, including Tatsuya Nakadai, Kei Sato, Jiro Hiramiki, Go Kato, Tsutomu Yamazaki, Etsuko Ichihara, and Komaki Kurihara. Haiyuza sent out not only stage actors into the world, but also many screen talents.