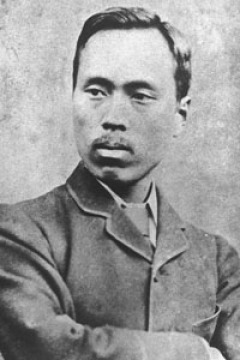 1849-1920. Physician and educator. Takaki studied Western medicine in Kagoshima and later moved to Tokyo. He served as a naval surgeon and studied for five years in Britain. He received the honor of being the surgeon general of the navy, one of Japan’s first medical doctors, and a baron. He established Seiikai Koshujo (Seiikai School), which is the predecessor of the Jikei University School of Medicine, Yushi Kyoritsu Tokyo Hospital, and the School of Nursing. He was also well known for his invention of “Mugimeshi Danshaku” (mugimeshi=rice with cooked barley) for eradicating beriberi in the navy by improving the sailors’ meals with rice that included cooked barley.
The great man of Meiji left these famous words: Don’t look at the illness; instead, look at the patient.

After returning from Britain, Takaki immediately formed the private medical organization Seiikai in 1881 and launched a medical school called Seiikai Koshujo (the Seiikai School). The German school of medicine was the mainstream of the medical world in Japan at that time, and the world of medicine tended toward authoritarianism and placed research above everything else. With that, Takaki tried to change the “style of medicine that perceives a patient as research material to the style of medicine that perceives a patient as a human being suffering from illness” by introducing the British school of medicine. He also established Yushi Kyoritsu Tokyo Hospital as a treatment hospital for poor patients in Atago-cho, Shiba Ward, and the School of Nursing, which was Japan’s first nursing school and which carried on the spirit of England’s Florence Nightingale, an early pioneer in nursing. In 1891, the Seiikai School moved to premises within the Yushi Kyoritsu Tokyo Hospital and became the Jikei University School of Medicine with its own hospital This is how the hospital-medical school that Kanehiro had long dreamed of came into being.

The Jikei University Scool of Medicine
Copyright © 2006 MINATO CITY.All right reserved
All rights are reserved for all contents, including published articles, pictures, and illustrations.