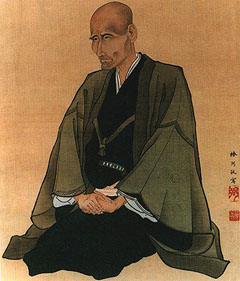 1804-1850. Physician and scholar of Western studies. Takano studied Dutch medicine in Nagasaki from a person named Siebold and opened his practice in Edo. He formed the research group of Western studies Shoshikai with Kazan Watanabe and others and delved into the study of Western culture. He was imprisoned for six years for writing “Yume Monogatari” (My Dream Vision), in which he criticized the diplomatic policies of the Shogunate, but he escaped from jail by bribing a prison guard to set fire to the prison. Although he returned to Edo and lived by hiding out in various places, he was eventually arrested and killed.
He spent his last days of life in his secret hiding place in Aoyama Hyakunin-cho

Choei changed his appearance by burning his face with chemicals and moved around the country, but he eventually returned to Edo in March 1850 and lived in hiding in Aoyama Hyakunin-cho. That area had a concentration of official residences of the Shogun’s foot soldiers and sympathizers, and the grounds of the residence of a foot soldier named Kojima contained a pawnbroker’s annex. Choei ran a medical practice on that premises under the false name of Sanpaku Sawa.

However, on the last day of October in the same year, he was attacked by a Shogunate official in an alley on his return home, arrested, and killed. A stone monument, inscribed with “The hiding place of Doctor Choei Takano,” stands where he died in what we know as Minamiaoyama. It was 48 years after his death before his honor was restored, and a commemorative monument inscribed with Kaishu Katsu’s composition was erected in Zenko Temple in Kita-Aoyama after he was posthumously bestowed the title of Lord. In 1837, he wrote Yumemonogatari (My Dream Vision), which stressed the need to open Japan to the world after the 1837 attack on an American ship, the Morrison. He continued to translate Western books while on the run and translated such books as Iryo Suyo (Fundamentals of Medical Care). Although he was a brilliant scholar of Western studies and a pioneer in medicine, he had a rather unfortunate life.