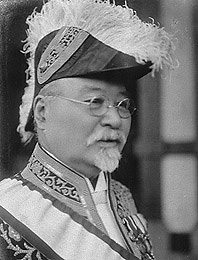 1854-1936. Politician. Takahashi studied English at the age of 11 at the Hepburn School in Yokohama and went to America as a foreign student dispatched by his clan at the age of 14. He was sold off as a slave by error and returned to Japan after going through much hardship in 1868. After changing jobs many times, his language proficiency was recognized, and he worked in the Ministry of Education and the Ministry of Agriculture and Commerce. In 1911 he was appointed governor of the Bank of Japan. From 1913 he successively held the post of Minister of Finance. Although he was loved by all, who referred to him by the nickname of “Minister Daruma” (Dharma Doll Minister), his attempts to reduce the military budget to control inflation incurred the military’s rancor, and he was assassinated by young officers at his home in Akasaka on February 26, 1936 (The February 26 Incident).
The site of his home where he spent his last 30 years is now his memorial park

Korekiyo, who was born in Zojoji Chumon-mae, lived in Sendai Manor in Shiba Atagoshita until he was 11, and in his house in Akasaka until his death in 1936. In his autobiography, he wrote this on New Year’s Day 1902: “Because my new house, which has been under construction in Akasaka Omote-machi, is today nearly completed, except for the entrance and the corridor, I have moved from my old residence in the estate.” The site of his house, which was the setting of the February 26 Incident, has been turned into the Takahashi Korekiyo Memorial Park and is now a place of recreation and relaxation on Aoyama Street, which contains Korekiyo’s bronze statue, a pond, stone lanterns, and trees.