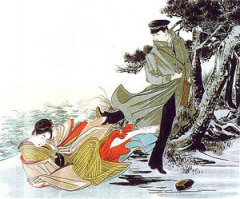 Takeuchi was such a good friend of Koyo Ozaki that he drew the illustrations for Ozaki’s outstanding work, Konjiki Yasha, and he frequented the exclusive restaurant Koyokan in Shiba Park with the inner group members of Kenyusha, such as Sazanami Iwaya, Shian Ishihashi, Bizan Kawakami, and Koyo Ozaki, who claimed that Koyokan was the best place to observe women. The progressive atmosphere of Koyokan, which was built in 1881 by the first president of the Yomiuri Shimbun newspaper, Takashi Koyasu, perfectly matched the ethos of a group of young writers and artists, the Kenyusha.