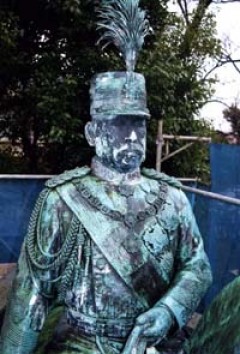 1835-1895. A member of the Imperial family, a politician and a military man. He was the first son of Prince Arisugawa, Imperial Prince Takahito. At the age of 17 he was betrothed to Imperial Princess Kazu, who was then 6 years old, but Princess Kazu was subsequently married off to the 14th Shogun, Iemochi, for the purpose of reconciling the Imperial court and the Shogunate. Legend has it that the annulment of his betrothal prompted him to become anti-Shogunate and to support the antiforeigner faction. Although he was appointed as the state affairs commissioner, he fell from grace after thee rebellions at Hamaguri Gate. When regal government was restored, he became the president of the new government, assuming the office of the commander of the Eastern Expeditionary High Command in the Boshin War (1868-69) and surrendered Edo Castle without bloodshed.
Statue of the Prince on horseback in Arisugawanomiya Memorial Park