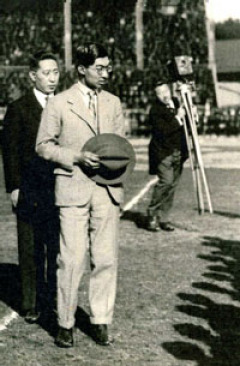 1902-1953. Member of the Imperial household. Prince Chichibu was born as the 2nd Prince Atsu of the Taisho Emperor and established the Prince Chichibu household as an adult. He loved all kinds of sports and was fondly known as “The Prince of Sports.” In 1928 he married Setsuko of the Matsudaira family, the former lord of the Aizu clan. During World War II he joined the army and became an Army Major General. He contracted tuberculosis and after the war spent his days of convalescence writing.
“The Prince of Sports” left a legacy in the sacred land of rugby

Prince Chichibu was known for his love of sports, such as hiking and skiing, but he was especially devoted to the promotion of rugby and served as president of the Japan Rugby Association. When Prince Chichibu died in 1953, the Tokyo Rugby Stadium in 2-chome Kita-aoyama was renamed Chichibunomiya Rugby Stadium. A statue of Prince Chichibu in a rugby uniform was erected there. Since the stadium’s completion in 1947, many notable games have been played there, and it is now a “sacred land” of Japan’s rugby players.