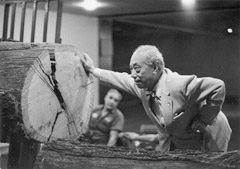 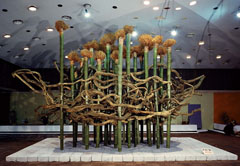 1900-1979. Ikebana artist. Teshigahara was born in Osaka as the first son of the ikebana artist Wafu Teshigahara. He broke away from his father because he questioned the traditional ikebana of arranging flowers in a routine fashion. In 1927 he founded the Sogetsu school, which advocates ikebana as art that respects the individuality of the person arranging the flowers, and he came to be known widely after appearing in the “Katei Koza” (Home Course) by JOAK (now NHK) the following year. He held exhibitions and demonstrations in Japan, Europe, and the United States throughout his life and raised ikebana to a world-class culture. He also carried on with a diverse range of creative activities until his last years, such as sculpture and painting.
Pursued a new style of Ikebana at the Sogetsu Hall in Akasaka

Teshigahara started the Sogetsu school in a rented house with only three rooms in Aoyama Takaki-cho (now Minamiaoyama). Although he set up the school, he did not have one student join in a year, so he immersed himself in studying ikebana while he painted fans and hand carved signboards for restaurants on the side. The school moved places as the number of students increased, but the one he established in 1933 at 3-banchi Koji-machi burned down during an air raid in World War II. The school was moved to Mita Tsuna-machi in 1947 and then to Akasaka in 1958 for the opening of the original Sogetsu Hall.

The present Sogetsu Hall was completed in 1977. The building was designed by Kenzo Tanba, who had also designed the old one, and the Sogetsu Plaza on the 1st floor contains the rock garden “Tengoku” (Heaven), created by Isamu Noguchi. Concerts are also held at Sogetsu Hall, and the place is popular as a center where people can enjoy a wide range of art as well as ikebana.

Sogetsu Ikebana
Copyright © 2006 MINATO CITY.All right reserved
All rights are reserved for all contents, including published articles, pictures, and illustrations.