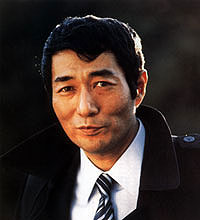 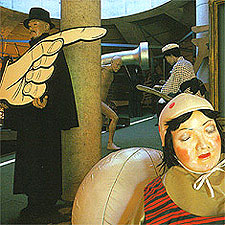 1935-1983. Poet and playwright. Terayama attracted attention as a gifted poet after his days at Aomori High School and Waseda University. He was active in various fields such as drama, scripts, novels, and reviews. He formed the theatrical experimentation studio Tenjosajiki in 1967 with the painter Tadanori Yokoo and others, and its avant-garde style enjoyed great response at home and abroad. He also exhibited talent as a movie director and has produced ambitious movies such as Den-en ni shisu (To Die in the Country), Kusa Meikyu (Grass Labyrinth), and Saraba hakobune (Farewell to the Ark).
Presented experimental drama in Tenjosajiki-kan in Motoazabu

The offices and theater of the theatrical group Tenjosajiki, led by Terayama, was in Namikibashi in Shibuya from 1969, but because of contractual problems it was moved in 1976 to the site of a lemon soda factory in Motoazabu. The new atelier was in solid black, and at the tip of the building’s pointed roof was a strange-looking doll designed by the stage designer Nobutaka Kotake billowing in the wind.

During his time in Azabu, Terayama enthusiastically presented outstanding works by the Tenjozajiki theatrical group, such as Directions to Servants, Shintoku-maru, Bluebeard’s Castle, One Hundred Years of Solitude, and Lemming Le Passe-Muraille. The group disbanded after Terayama’s death in 1983, but it had turned out many talents, including the movie director Kaizo Hayashi.