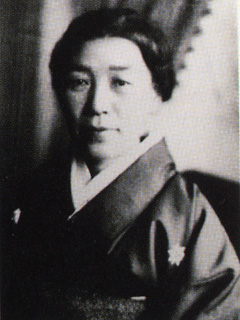 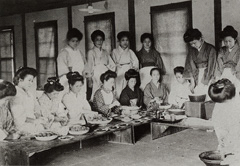 Toita’s grandfather was an astronomer and mathematician for the Sendai clan, and her father was a scholar of Chinese classics. She was an independent woman who taught sewing while studying English at Ferris Girl’s School. In 1902, at the young age of 33, she established the Toita Hosai School, the predecessor of Toita Women’s College, in a corner of Shibakoen. Because the number of students increased dramatically by her simultaneous teaching method, the school was moved to its present location at 2-chome Shiba two years later. By 1916, she also opened the Mita Senior School for Girls, which is the predecessor of the Mita Junior and Senior High Schools.

Toita developed teaching that strives for the character building of women by getting them to learn sewing techniques. Her teaching philosophy, which applies a verse of the Analects of Confucius called “Chikoraku” (General meaning: Whatever you do, you will progress if you enjoy it), has been passed on as the school’s motto, and even when most of the Mita school buildings burned down in the Great Air Raids of Tokyo, lessons were continued in a remaining burned-out building. In her private life, she was married to Yoshizaburo Takeda, a minister of the Toriizaka Church, and contributed to charitable work and inspirational projects for boys and girls.