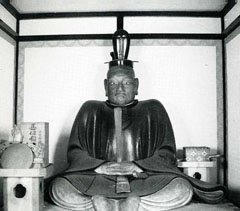 1543-1616. Shogun. Ieyasu was the first son of the Lord of Mikawakoku Okazaki Castle, Hirotada Matsudaira. After the Battle of Okehazama, he became a sworn ally of Nobunaga Oda and steadily expanded his territory after Nobunaga was murdered by Mitsuhide Akechi in the Honnoji Incident. After the battles of Komaki and Nagakute, Ieyasu served under Hideyoshi Toyotomi, and after Hideyoshi’s death, he became the barbarian-subduing Shogun and established the Edo government. The Edo period had a tranquil time of peace for 264 years, and Ieyasu is hailed as the founder of the Edo period.
Minato City is dotted with shrines and temples associated with Ieyasu, including the Tokugawa family temple, the Zojo Temple

The Zojo Temple of the Jodo Buddhist sect was chosen as the Tokugawa family temple when Ieyasu became a believer of its resident priest, Zon-o, and it was moved from the Koji-machi area in 1598 to its present location in Shiba. The statue of Amitabha Tathagata Ieyasu, which Ieyasu worshiped fervently, was placed in Zojo Temple after Ieyasu’s death. It was believed that Ieyasu was able to dominate the whole of Japan because of this statue, which was also known as Kurohonzon, and it has attracted the devotion of ordinary people as the miracle-working Buddha who brings good fortune and prevents disasters. It can still be viewed during its exhibition a few times a year.

Toshogu Shrine in Shibakoen houses a wooden statue of Ieyasu in a seated position, which he had commissioned on his 60th birthday. The shrine was originally the Ankoku holl of Zojo Temple for enshrining Ieyasu, but it was separated from Zojo Temple during the disassociation between Buddhism and Shintoism in the Meiji period and was renamed Tosho Shrine. Atago Shrine was built in 1603 by Ieyasu’s order, and the Shiba Daijingu Shrine at the Shiba Daimon Gate enshrines Yoritomo Minamoto as well as Ieyasu.