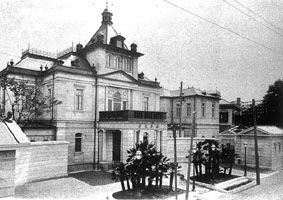 1872-1925. Nobleman. Born into the Tayasu family, one of the three Tokugawa lords, Yorimichi was adopted by the Kii Tokugawa family and became its 15th Lord Kii Tokugawa in 1906. For two years from 1896 he studied at Cambridge and toured around Europe and America before returning home. Impressed by the library systems of Western Europe, he established Japan’s first private library, Nanki Bunko, within his home in 1898. From 1913 he served as the president of the Japan Library Association. Based on designs by William Merrell Vories and other architects, his son Yorisada built Nanki Music Hall as a venue for concerts and lectures on a site immediately to the south of Nanki Bunko, and dedicated himself to cultural activities just as his father had done.
Established Japan’s first private Library at Iikuramachi

Yorimichi, who returned from Europe and America in 1898, set up a library in a corner of his own home in Iikura-cho, with 20,000 books kept by the Kii family, and named it Nanki Bunko. The reading room was on the 1st floor, and the library owner’s office was on the 2nd. This office contained books stored by the book-loving Yorimichi himself and a meeting room. A new annex with a penthouse was built in 1908, and the library was opened to the public.

Legend has it that Kafu Nagai, who lived in the Henki-kan House in Azabu Ichibei-cho, visited the library two or three times a week, and Toson Shimazaki, who lived in Azabu Iikurakata-cho, had this to say of Nanki Bunko: “We can be proud of it as a cultural establishment in the Iikura area.” After the Great Kanto Earthquake of 1923, all the books were donated to the library of Tokyo Teijoku University, and Nanki Bunko was closed down the following year. A portion of the building is now used as the Villa Del Sol Hotel at Izusan Onsen in Atami, and in 2008 it was designated as a registered tangible cultural property of Japan. Yorisada’s Nanki Music Hall was destroyed by the Great Kanto Earthquake, after which plans to rebuild the music hall were abandoned. The pipe organ, which had been sent from England, has since been moved to Sogakudo Concert Hall in Ueno Onshi Park (Which can be translated as "Ueno Imperial Gift Park").