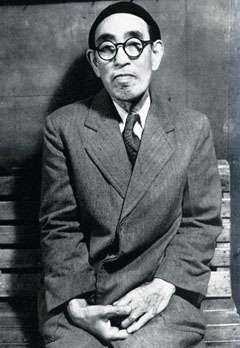 1879-1959. Writer. After traveling through America and France, Nagai published many writings, such as America Monogatari (American Stories) and France Monogatari (French Stories), and became a popular writer who represented the aesthetic school. From 1910 to 1916, he presided over Mita Bungaku magazine while serving as a professor at Keio University, in which he published novels, essays, and dramas, but his style increased its escapism tendency toward the world of popular writing of Edo after a crackdown on socialism in 1910. His ideas and lifestyle in complete disregard of the times while in seclusion in Ichii can be found in detail in his diary Danchotei Nichijo (The Danchotei Diary).
Lived in seclusion by naming his painted house Henki-kan

Nagai lived in a two-story timber house in Azabu Ichibei-cho (now 1-chome Roppongi) in 1920 and named the house “Henki-kan” because it was painted. He started his life of seclusion in this Western-style house with an extended kitchen and no shoji screens, sliding paper doors, or tatami mats. The Great Tokyo Earthquake occurred in 1923, but the house fortunately received no fire damage, only a few fallen roof tiles. Nagai’s enthusiasm for writing became greater from the early Showa era, and he produced many outstanding works, including Tsuyu no Atosaki (During the Rains), Hikage no Hana (Flowers in the Shade), and Bokuto Kitan (A Strange Tale of East of the River).

In 1945, however, the house was destroyed in the Great Air Raids of Tokyo, and he lost his books, except for his diary and a briefcase containing his rough draft of a novel. Twenty?six years of his time in Henki-kan had ended, and until his death in 1959 at the age of 79, he never returned to Minato Ward.