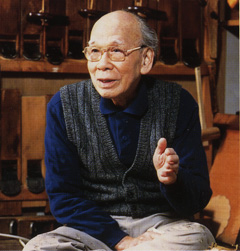 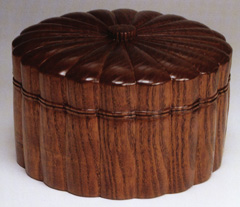 1912-2002. Craftsman. Nakadai became the student of the joiner Fuzan Takeuchi in 1925 and studied various techniques, such as joinery and openwork, mainly for tea service utensils. In 1933 he became independent. While he served in World War II, he continued to pursue the world of woodcraft by producing wooden fighter planes, but he felt a limitation with joinery from around 1960 and started to put his efforts into creating carvings made of paulownia wood. After winning several times in the competition in the Japanese Traditional Crafts Exhibition from 1962, he received the Order of the Sacred Treasure, Gold Rays with Rosette, in 1983, and was certified as a Living National Treasure as the keeper of “Woodcraft,” an Important Intangible Cultural Heritage, in the following year.
Produced many brilliant articles of woodcraft at his workshop in Toranomon

Nakadai became independent in 1933 at Nishikubotomoe-machi, Shiba Ward (now 3-chome Toranomon). After becoming independent, this Living National Treasure produced many of his outstanding pieces in his studio. We can understand what his studio meant to him from a writing entitled “Chichi no oto” (Father’s Sound) by his second daughter, Keiko Nakadai: “I believe the studio was like a mother’s womb to my father. It was a place where he was protected from everything. It was a place where he could return to his tranquil and docile self, surrounded by the warmth and scent of his beloved wood, and by the tools he has used and known for many years.” He was awarded the Minato City Merit for his distinguished services to the Ward in 1982, and his special exhibitions were held four times in the Minato City Local History Museum.