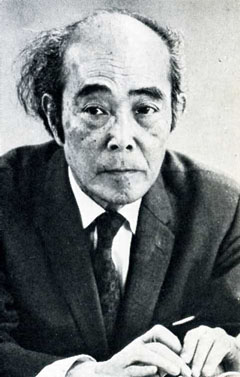 1901-1983. Haiku poet. Nakamura was born in Fujian Province in China where his diplomat father was posted, and he went to Japan when he was three. He became a student of Kyoshi Takahama in 1929, put his efforts into creating Haiku, and published “Hototogisu” (Cuckoo) in a Haiku magazine. His style was referred to as Ningen Tankyu-ha (human exploration), and he had a significant influence on the poetical circle in early Showa. In 1946 he launched and presided over the Haiku magazine Banryoku and also taught young people.
His memory of the elementary school in Aoyama produced a famous verse that symbolizes the times

One of Nakamura’s outstanding verses: “Furu yuki ya Meiji wa toku ni narinikeri” (Snow falls and Meiji is all but a distant memory). But his verse was written in 1931 when Nakamura was a college student and visited his old school, Seinan Elementary School. To dedicate a stone monument inscribed with this verse that had been erected in the school’s forecourt for the 70th anniversary of its establishment, Nakamura himself unveiled it.

For Nakamura, who moved around China, Tokyo, and Matsuyama because of his father’s work, Seinan Elementary School was a memorable school that he last commuted to in Tokyo. He has written in his diary: “My homeroom teacher, Mr. Shintaro Suganuma, was a hot-blooded man, and he really got mad when he got mad, but when it was time to play, he used to enjoy playing sumo and baseball with us.”

Nakamura was prompted to write the famous verse when he visited the Seinan school after 20 years. Although he was relieved to find it unchanged, when he saw children in overcoats fastened with golden buttons appear in the school yard as the snow started to fall, he nevertheless felt the passing of time from when he was a boy in kimono and wooden sandals.