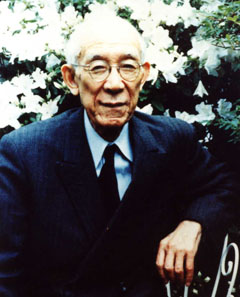 1894-1982. Poet and scholar of English literature. Nishiwaki published a collection of English poems called Spectrum in 1925 while studying in Britain. After he returned to Japan, he worked as a professor at Keio University and published works and poetics in Mita Bungaku and Shi-to Shiron, introducing the ideas and literature of Europe, such as surrealism. He continued to work energetically after World War II and published such anthologies as Tabibito Kaerazu (A Traveler Never Returns) and Daisan no Shinwa (The Third Myth). In 1957 he was nominated for a Nobel Prize in literature.
Developed a modern poetry movement based in Mita

Nishiwaki moved to Tokyo in 1911 to become a painter and lived in a rooming house at 6-chome, Aoyama Minami-machi. But he gave up on his wish to become a painter because of his father’s death. A year after that, he enrolled in the Department of Finance at Keio University and studied English, Greek, Latin, and German. On graduation in 1917, he submitted his final year’s dissertation, “Pure Economics,” in Latin.

He went to Britain in 1922 and there was introduced to and influenced by the modernism literary movement in London while studying at the University of Oxford. He also studied Impressionist paintings in Paris. Nishiwaki returned to Japan and became a professor of English literature at Keio University in 1926, where he continued to teach until 1962. During those years he successively published many poems and poetics in Mita Bungaku magazine. It is said that his students, including Shuzo Takiguchi (poet and art critic), frequently visited him at his home in Fujimi-cho, Azabu Ward (now 4-chome Minamiazabu), to debate with him on literature and art until late in the night.