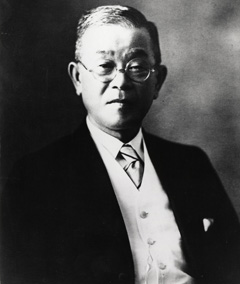 1860-1940. Industrialist. Born in Kaikoku (Yamanashi Prefecture, Nezu became a village chief at the age of 33, but he moved to Tokyo in 1897 and entered the corporate world after earning big profits through stock investments. In 1904, he was elected a member of the House of Representatives and the following year was appointed president of Tobu Railway. He was also involved in many railway building projects and was called the King of Railways. When he visited the United States in 1909, he was impressed by the social contributions made by millionaires. Therefore he put his efforts into contributions of this kind by establishing schools and collecting antiques, based on the idea that he had an obligation to return the profits he made through society back into society.
Opened his garden and his collections to the general public

Kaichiro, who had acquired some land in Aoyama Takaki-cho in 1906, moved his residence to this land in 1909 and created a garden. This garden had a very rustic atmosphere with rare trees and oddly shaped rocks, and it was said to have a view that was a collection of the breathtaking view of Hakone, the natural beauty of Karuizawa, and the valleys of Okutama. After Kaichiro’s death in 1940, the Nezu Institute of Fine Arts was established according to his dying wish, and his collection, mainly consisting of antiques and tea sets, were shown widely to the general public. Since then the museum’s collection has attracted many people for its richness and quality. Kaichiro’s wish to share his profits with the public is still alive today.