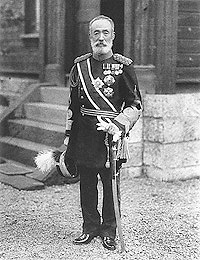 1849-1912. Military man and army general. Maresuke Nogi was the third son of Maretsugu Nogi and served in the Boshin War and the Seinan War. After studying in Germany, he took to the field as the Brigade Commander of the 1st Infantry Regiment in the Japanese-Sino War and was the Commander of the 3rd Corps in the Russo-Japanese War.
From his birth to suicide, his fierce life reflected the times

General Nogi, who is referred to as a military man of Meiji, was born in the manor of the daimyo Mori Kainokami of the Chofu clan in Azabu Hidakubo, Edo. His childhood name was Nakito, and he was renamed Marehito as an adult. The grounds of the manor had formerly contained the original “Ubuyu no Ido” (well), where Marehito’s father is said to have poured cold water on the young Nakito, who was crying because of the cold, but in a redevelopment of these grounds it was buried. The grounds of the manor had also contained the bronze statues of General Nogi and Urauri Tsuji, a boy who financially supported his family by selling papers on which was written fortune-telling advice, but they have been moved to the old Nogi Manor. The stone monument that for many years indicated the manor as the birthplace of General Nogi has also been moved, to Sakurazaka Park, which is south of Roppongi Hills.

The old Nogi Manor and the stables, which are designated tangible cultural properties of Minato City, are In Akasaka, where Nogi spent his life from 1879. The stables consist of a valuable brick structure, and it is said that the manor was designed by Nogi himself, based on a building of the French army headquarters. Nogi Shrine was built nearby after his death, and the slope in front of the shrine was named Nogizaka. His remains rest in Aoyama Reien (Name of Cemetery).