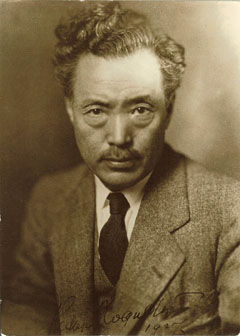 1876-1928. Bacteriologist. Born into a poor farming family in Fukushima, Noguchi severely burned and damaged his left hand when he was 1 year old and decided to become a doctor after seeing the doctor who was treating his burns when he was older. In 1893 he obtained his doctor’s license. After working as an assistant at the Institute of Infectious Diseases, he went to America in 1900, worked at the Rockefeller Institute for Medical Research, and succeeded in isolating the pure culture of spirochete, the syphilis pathogen. He became an international figure. In 1928 he was infected with yellow fever while researching the disease in Accra (now the capital of Ghana) in West Africa and died at the age of 51.
Noguchi built his foundation as a researcher at the Institute of Infectious Diseases

After passing examinations to become a doctor, Noguchi developed an interest in bacteriology. The Institute of Infectious Diseases, founded by the prominent physician Shibazaburo Kitasato in Atago-cho, Shiba Ward, was then the leading institute in the field of bacteriology. Although a person was not allowed to join unless he or she had graduated from Teikoku University, Noguchi was allowed to by special permission, allowing him to acquire the knowledge that became the base for his subsequent success.