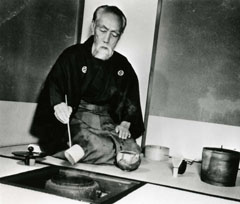 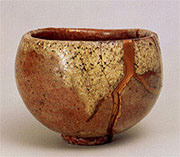 1881-1971. Industrialist. Hatakeyama was born into the family of the lord of Nanao Castle, in Noto. Because his family was brought to ruin when the clan system was abolished, he struggled to graduate from the Technical College of Tokyo Teikoku University. He established the Inokuchi Machinery Office in 1912 to bring out the radial flow pump invented by his former teacher Ariya Inokuchi. He steadily extended his reach and established the Ebara Corporation in 1920. While he continued his success as a businessman, he devoted himself to collecting fine art.
Built a museum with tea rooms in Shirokane

Hatakeyama, who had purchased the site of the manor of Count Terashima in Shirokane Saru-machi in 1937, reconstructed the Hannya-en from the Kamakura era from Hannya Temple in Nara and the Noh stage that belonged to the Yokoyama family, the chief vassal of the Kaga Maeda family. The reconstruction was completed in 1943, and he held a tea ceremony for the opening of the tearoom. Hatakeyama, who was the master of ceremonial tea, presented his collection of fine art such as tea service utensils when he held tea ceremonies, and he built a museum in a corner of the property to enable the general public to view htis collection. The garden is dotted with tearooms, and the museum is popular as a museum of the tea ceremony.