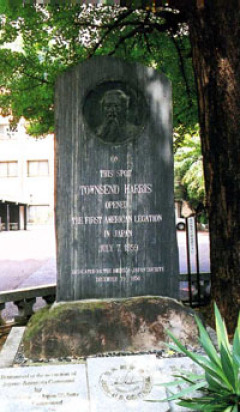 1804-1878. American diplomat. In 1856 Harris assumed his duties in Shimoda as the first U.S. Consul General in Japan, according to the treaty of peace and amity between Japan and the United States. He established the first U.S. Consulate in Japan in Gyokusen Temple and concluded the Shimoda Treaty. He traveled to Edo to press the Shogunate to open Japan for trading, and in 1858 he succeeded in the signing of the friendly trade agreement between Japan and the U.S., thus breaking down the Shogunate’s seclusion policy ahead of other powers. He was later promoted to the position of minister and established the legation in Zenpuku Temple in Azabu, Edo. He returned to the United States in 1862 and died at the age of 73.
Stayed in Zenpuku Temple in Azabu for three years as the American Minister

From 1859, Harris stayed at the Zenpuku Temple in Azabu, which became the first American legation, with the interpreter Heusken. He initially used the inner study and the reception hall, but when the study was destroyed by arson caused by the masterless samurais of Mito, he moved to the main hall and the founder’s shrine. It is said that he mainly stayed in the main hall, using the next room as the drawing room and the south end of the outer chamber as the dining room.

The present main hall is a reconstruction of the annex of the Higashi Hongan Temple, of Osaka, and in the garden is a monument with a relief portrait of Harris by Takashi Masuda, the chief director of the Mitsui Partnership Corporation, who is said to have studied English at the legation. The most shocking event for Harris during his stay in Japan of less than six years was the assassination of Heusken, which occurred a year before his return to the U.S. Legend has it that when he saw Heusken’s dead body, he grasped it in mourning and loudly lamented his grief at the tragic death of his dear friend.