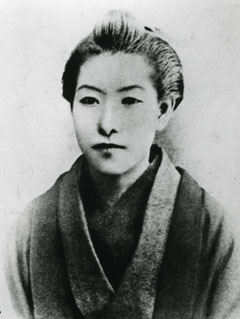 1872-1896. Poet and writer. She studied at the Haginosha school of poetry run by Utako Nakajima and showed talent from early on. After her father’s death in 1889, she began writing novels to make a living, but she also had a sideline business, a general merchandise store, because she could not survive on income from writing alone. In less than a year from the end of 1894, she successively published such masterpieces as Otsugumori (The Last Day of the Year), Take Kurabe (Comparing Heights), Nigorie (Troubled Waters), and Jusanya (13th Night). She died at the young age of 24 from tuberculosis.
The writer’s training and love affair began in Shiba

When we hear the name Ichiyo, we immediately associate her with Taito City, which was the setting for Takekurabe (Comparing Heights), and with Hongo, Bunkyo Ward, where the writer spent her busy last years. She spent her early childhood in Mikawadai-cho, in Azabu, and she also lived in Takanawa Kita-machi and in Shiba Seio Teramachi, where her brother Toranosuke lived, when she began to have financial problems. The story of the talented but unrecognized potter and his sister Umoregi (Undiscovered Wood) was based on her brother.

When she was 19, she visited the home of the novelist Tosui Nakarai, who lived in Minami Sakuma-cho, in Shiba Ward (now Nishi Shimbashi), and began to look up to him as her mentor. In 1892 she published her first work, entitled “Yamizakura” (Flowers at Dusk), in a magazine headed by Nakarai. A year and two months of interaction with Nakarai provided her with the necessary training to become a writer, and their relationship also became a much-talked-about love affair in the literary arena of Meiji.