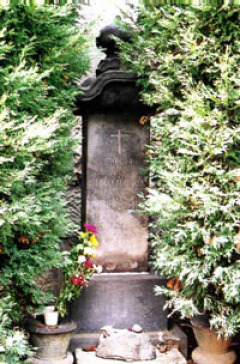 1832-1861. Interpreter from Amsterdam, Holland. Heusken arrived in Japan in 1856 as the interpreter and secretary to the American Consul General Townsend Harris. He was involved in the conclusion of the friendly trade agreement between Japan and the U.S. in 1858, and he also helped with the conclusion of the Japanese treaty with Britain and Prussia. In 1861, he was attacked and assassinated by antiforeigner masterless samurais on his way back to the American legation. He was five days short of turning 29. The Heusken Nihon Nikki (The Diary of Heusken in Japan) is a valuable document about the history of diplomacy during the end of the Tokugawa Shogunate.
Stayed at the American legation and killed by assassins in Nakanohashi

Heusken played an active role in the complicated negotiations between Japan and the U.S. as Harris’s right?hand man, and when Harris became seriously ill, Heusken directly negotiated with the Shogunate’s committee as Harris’s deputy. Because he was fluent in English, French, German, and Japanese, as well as his native Dutch, he worked busily for the diplomatic groups of various nations, and it is said that he was popular for his cheery disposition. However, on the night of January 15, 1861, he was attacked by some antiforeigner samurais of the Satsuma clan near Nakanohashi in Furukawa on his way back from Akabane Setsugusho (now Iikura Park) on his way to Zenpuku Temple in Azabu, where the American legation was located. He received deep wounds to his abdomen and fell off his horse, and was taken to his temple lodging, but he died at midnight a day later.