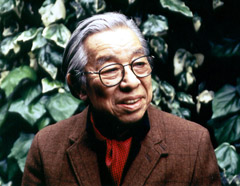 1911-2005. Fashion designer and fashion critic. After graduating from Meiji University, he established the men’s apparel brand VAN JACKET in 1951 in Osaka after working for an apparel manufacturer. He popularized the “Ivy Look” with the VAN brand and significantly influenced the lifestyle and ideas of youth, but the company went bankrupt in 1978. Later on, he worked actively as a fashion critic and fashion producer, and he also served as the top adviser for Japan Men’s Fashion Unity, a nonprofit organization for the promotion of communication between specialists in the fashion industry.
Men’s God, a name that popularity had assigned him, was based on Aoyama Street and took the fashion world by storm

Ishizu, who ventured into Tokyo from Osaka in 1955, launched the Ivy Look from his inspiration by Ivy League students on the East Coast of the United States.. The fashion, based on blazers and button-down shirts, became a huge hit among youth and created a social phenomenon, which gave birth to the “Miyukizoku,” youngsters who swaggered along Miyuki Street in the Ginza of Tokyo wearing clothes by VAN.

The brand’s popularity increased further, and after the main shop was opened in 1964 at 3-chome Kita, Aoyama, associated establishments opened in succession in that area. A variety of fashions was released from the VAN99 Hall built on the 1st floor of the main shop. The brand disappeared because of bankruptcy, even though it had established coined terms like TPO and words like Trad and Casual and had grown to such heights of popularity that Aoyama was called Van Town. Ishizu, who was well known as Men’s God, a result of his taking the fashion world by storm in the ‘60s and ‘70s, subsequently worked from Aoyama. He died at the age on 93 in May 2005.