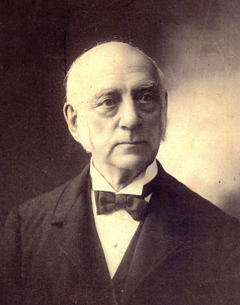 1815-1911. Preacher at the American Presbyterian Church, physician, and linguist. Hepburn arrived in Japan in 1859. He opened his practice in the foreign concession of Yokohama; engaged in medical, missionary, and educational activities; and completed a Japanese translation of the Bible. In 1867 he published Japan’s first Japanese-English dictionary, Waeigo Rinshusei, and the Hepburn alphabetic font used in the 3rd edition became the standard alphabetical font in Japan. In 1889, he was appointed the first president of Meiji Gakuin. He returned to America three years later and died at the age of 96.
Established Meiji Gakuin with this belief: “Do for Others”

Dr. Hepburn, who had arrived in Japan with his wife, Clara, opened the Hepburn School while engaging in medical and missionary activities in Yokohama, and he and Clara taught English. Korekiyo Takahashi (later the Minister of Finance) and the Japanese minister for Britain, Tadasu Hayashi, also studied at this school. The Hepburn School later merged with Tokyo Icchi Shingakko in the foreign concession at Tsukiji, Tokyo, and Meiji Gakuin was established in 1886. The present campus in Shirogane was opened the following year.

The first graduate of Meiji Gakuin and lyricist of the school song, Toson Shimazaki, describes his life as a student in his autobiographical novel Sakura no mi no juku suru toki (When the Cherries Ripen). The campus contains the bust of Dr. Hepburn; the Imbrie Pavilion, which is Japan’s important cultural property the Memorial Hall, which is Minato City’s tangible cultural asset; and the chapel. It is strange that Hepburn Hall, which had been built as a dormitory, unfortunately burned down on the day of his death.