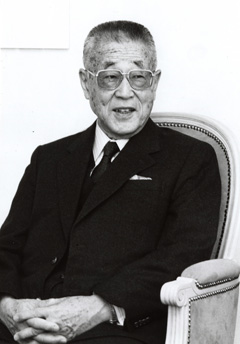 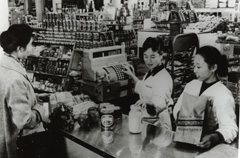 Tokuo Masui関連写真
(Bottom) Inside a shop around 1955

1915-2001. Industrialist. Born into a family that ran a luxury fruit shop, Masui helped his family with the business. Although the shop in Aoyama was closed down during World War II because they could not purchase good fruits under the rationing law, it was rebuilt in 1949. Using the idea of the American supermarket, Masui opened Japan’s first self-service supermarket, Kinokuniya, in 1953. In 1975 he was awarded the Medal with Blue Ribbon for his contributions to the modernization of the distribution industry in Japan.
Opened Japan’s first supermarket, Kinokuniya, in Kita-Aoyama

The shop rebuilt on its present location in 3-chome Kita-Aoyama as a retailer of fruits and clean vegetables in 1949. It was reinvented four years later as Japan’s first self-service supermarket. The shop was divided by glass windows, which were a rarity back then, and was the envy of people because of its abundance of fresh vegetables, American canned foods, cash registers, shopping carts, and paper bags. Most of its first customers were Americans staying in Japan, but the opening of Japan’s first in-store bakery, the sale of air-delivered natural cheeses, the well-examined health-conscious seasonings, and goods selected according to Masui’s prospective ideas proved popular also among the Japanese, and Kinokuniya became famous as a luxury food shop.

The shop in Aoyama has now become a trailblazing force of sophisticated supermarkets known as Kinokuniya International.