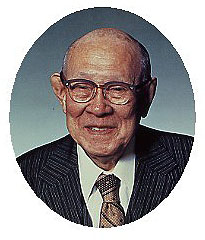 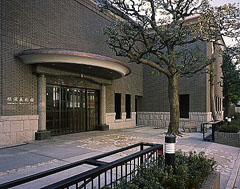 1804-1989. Industrialist. In 1932, Matsuoka established Matsuoka Sangyo (now Matsuoka Group) and expanded it by launching businesses in real estate, frozen food storage, and hotels after World War II. He was also known as a collector of fine art, and he established the Matsuoka Museum of Art in 1975. The museum’s collection ranges widely from Chinese ceramics that Matsuoka collected over half a century to ancient oriental art, Gandhara Indian sculptures, French modern paintings, Japanese paintings, and modern sculptures.
Established the Matsuoka Museum of Art and showed many of his collections to the public

Born in Tsukiji, Tokyo, Matsuoka played an active role in the industrial world from his earlier years, but he was also a person with a great knowledge of art. His interests spanned from calligraphic works, paintings, and antiques to an appreciation of ceramics, and after he attended an auction abroad in 1972, his attention was directed mainly to collecting Chinese ceramics. When he turned 80, he established the Matsuoka Museum of Art with the idea that his collections of fine art should not be kept as private property, but should be passed on to future generations as cultural assets of all humanity. He traveled abroad several times in his last years and put his heart into collecting French impressionist paintings and the antiques of ancient Egypt, Greece, and Rome.

After his death, the museum was moved in April 2000 to the site of his private residence in Shiroganedai, Minato City. The museum houses international masterpieces such as Bourdelle’s sculpture Penelope that adorns the entrance, the Chinese ceramics “Octagonal vase painted with blue flowers, phoenixes, plants, and insects” and “Round vase painted with blue flowers, dragon, and scrolling arabesque design,” and French modern paintings by Renoir and Chagall. The collection contains nearly 1,800 pieces of fine art.