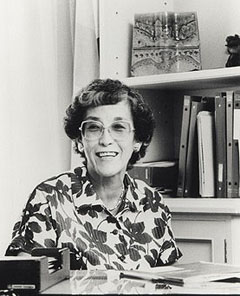 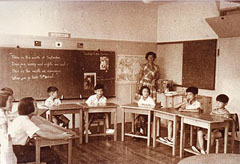 1917-1989. Educator. Matsukata’s paternal grandfather, Masayoshi Matsukata, was a veteran statesman of Meiji, and her sister, Haru, was the wife of the former American Ambassador to Japan, Edwin O. Reischauer. By the principle of her second generation Japanese-American mother, she was educated by American tutors from a young age and sent to study at Principia school and college in the United States. She obtained a master’s degree in library science at Columbia University, and when she returned to Japan she established the Nishimachi International School in Minato City.
The seed of international education was sewn at the Matsukata House in Motoazabu

When Matsukata returned to Japan after 17 years abroad, there were still profound ravages of the war that had ended with Japan’s defeat three years earlier. Taneko, who believed that education was crucial for Japan to recover in a true sense and to contribute to world peace, decided to build a unique school with the help of friends who have school-age children. She intended to provide an education that values self-initiative and independence, just like the private school her mother, Miyo, had set up for her children before the war, and she and her sister, Haru Reischauer, were in charge of teaching English, which is essential in understanding different cultures.

She started the school with just four Japanese students in 1949 in her Motoazabu home, which had partially survived the air raid. It has now been developed into a school with more than 400 students from 25 countries and more than 4,000 graduates. Part of the school building was built according to the design by W. M. Vories in 1921 as Matsukata’s father’s home (Matsukata House), which is still used to this day, and it has been selected as a historical building by the city of Tokyo.