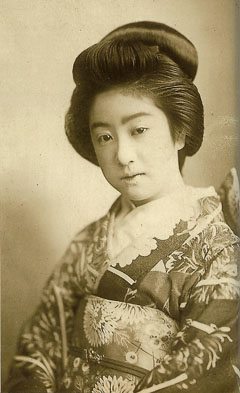 1894-Unknown. Geisha. Manryu’s real name was Shizu Tamukai, and she was a rare beauty. She was known as a model for postcards that portrayed beautiful women, which were popular in those days, and enjoyed such popularity that she was voted the most beautiful woman in Japan by readers voting from 100 beauties in a contest sponsored by a magazine publisher. She married a Teikoku University graduate and Doctor of Judicial Science, Yoichiro Tsunekawa, after being rescued by him when she nearly drowned in a flood at an inn in Hakone, but her husband died of illness a few years later, and she remarried, to the architect Shinicihro Okada. She taught the art of tea ceremony after her second husband’s death.
The Akasaka geisha was popular for her postcard portraits

Manryu was adopted by an Okiya (a boarding house for maiko and geisha in which they stayed during the length of their contract) called Harumoto in Akasaka when she was 7 years old. Akasaka Tameike-cho, which in the mid?Meiji period, was created by filling in Tameike Pond, had rows of restaurants and geisha houses that led to the red-light-district of Akasaka. Manryu was attending an elementary school in Akasaka, but there is a story of her being withdrawn from school because her beauty was a negative influence on the other children. Postcards with portraits of beautiful women were originally made to comfort soldiers during the Russo-Japanese War, but they became popular and were were printed in massive quantities, like “bromides of geishas,” after the war, and Manryu was the star. Her popularity was so great that people used to say, “When it comes to sake, it’s Masamune, and when it comes to a woman, it’s Manryu.” She also appeared in posters of cosmetics and kimono shops. The female author Shigure Hasegawa praises Manryu’s beauty in her book Kindai Bijinden (Stories of Modern Beauties).