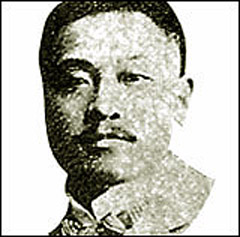 1870-1917. Art historian and art critic. The firstborn son of a government official, Takatoshi Iwamura. From 1888, for five years he studied art in the United States and Europe. In Europe he learned painting techniques and read the history of Western art at the Academie Julien in Paris. When he returned to Japan, he formed the Hakubakai with Kiyoteru Kuroda, whom he met in Paris. He later became a professor at the Tokyo Art School (now the Tokyo National University of Fine Arts and Music). He also served as judge for a Ministry of Education art exhibition and devoted himself to founding the National Association of Art.
Joined the Oil Painting Institute in Akasaka Tameike after studying art in America and Europe

In 1899, he became a lecturer at the Tokyo Art School and was later appointed professor. His humanistic approach to lessons was very popular, and there are many stories of students enrolling at the school primarly to attend his lectures. There was a period when he taught at Keio University as a result of Ogai Mori’s recommendation. Because his home was in Imoaraizaka, Azabu Kita Nichigakubo, his trade name was Imoarai.