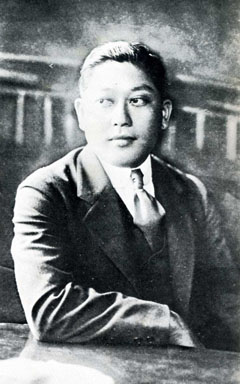 1887-1940. Writer. Minakami made his debut as a writer when his first work Yamanote no Ko (Child from Yamanote) was published in 1911 in Mita Bungaku while he was attending Keio University. He contributed greatly to the relaunch of Mita Bungaku in 1925 as the leading figure of the Mita school. He not only engaged in writing activities and instructing younger people, but he also served as an executive of Meiji Life Insurance Co., which was founded by his father, and he continued to wear two hats throughout his life: one of a writer and the other of an industrialist.
Spiritual leader of the revived the literary magazine Mita Gungaku

Minakami was born in the house in Azabu Iikura-cho, which became the setting for his novel Yamanote no Ko (Child From Yamanote). In 1891, he moved to Matsuzaka-cho in Shiba Ward, and he became a member of the baseball club when he was in Keio High School. He played as the second fielder, and he continued to enjoy baseball even after he became a writer by arranging games between the Mita Bungaku (this magazine had its own amateur baseball team) and Satomi Ton teams.

When the Mita Bungaku magazine was launched in 1910 while Minakami was attending Keio University, he eagerly attended lectures by the newly appointed professor Kafu Nagai who was also the founder of the magazine Mita Bungaku, and he developed a friendship with the playwright, script writer, and director of the Bungakuza Theater, Mantaro Kubota and others. He established the literary group Rei-no-kai by gathering his writer friends at his home in Matsuzaka-cho and wrote the story “Yamanote no Ko” at these gatherings. He devoted his efforts as a member of the editorial staff for the relaunch of Mita Bungaku, and Kubota referred to him as “the spiritual leader of Mita Bungaku.” The Suiyokai (Wednesday Club), which was held each month at his home to foster friendship with young writers in conjunction with the meeting for Mita Bungaku continued until the 10th anniversary of the magazine’s relaunch in 1935.