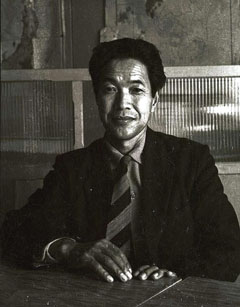 1907-1981. Scholar of folk customs. While working as a teacher at an elementary school in Osaka, he was interested in folklore and traveled around Japan in search of the country’s lost elements of folklore. He continued to carry out field study in every corner of the islands of Japan throughout his life, and his research on everyday items used by migrating people, such as fishermen, based on his extensive traveling experience established a unique discipline that can be called “Miyamoto Folklore,” which is different from the Yanagida Folklore of Kunio Yanagida, which mainly studied settled crop farmers.
Meticulously researched the whole of Japan with Keizo Shibusawa’s Attic Museum as base

Miyamoto, who was a teacher in Osaka, met Keizo Shibusawa in 1935, who was then attending the Kinki Folklore Society Conference. Encouraged by Shibusawa to summarize his notes on the life of fishing villages in the Seto Inland Sea, which was his home, he moved to Tokyo in 1939, leaving his wife behind in Osaka, and began his folklore research at Shibusawa’s Attic Museum (which later became the Institute for the Study of Japanese Folk Culture) in Mita Tsuna-machi, Shiba Ward (now 2-chome Mita).

Shibasawa wrote this in “Waga Shokukyaku wa Nihonichi: Doryoku no Minzokugakusha Miyamoto Tsuneichi-kun no koto” (Aug, 1986, Bungei Shunju): “To know the Seto Inland Sea, unless one explores every bit of Japan, one will not be able to find its true form. I encouraged him to come to my place, telling him that he could travel as much as he likes. Agreeing to this, Miyamoto came to live at my house. For 22 years he has been a member of my family.” Receiving such strong and generous support from Shibusawa and being influenced academically by him, Miyamoto traveled throughout the country, taking massive amounts of photographs as documents and energetically continuing with his research.