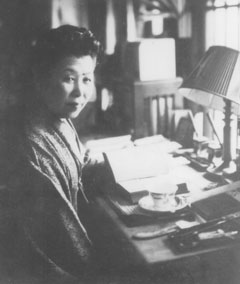 1893-1968. Translator and scholar of children’s literature. While studying waka poems as a student of Nobutsuna Sasaki and Japanese classics at Toyo EIwa Girl’s School, she began writing children’s stories with the encouragement of the poet and translator of Irish literature, Hiroko Katayama. After graduating from school and working as an English teacher and in a publishing house, she introduced much literature for all ages, such as The Christmas Carol, Anne of Green Gables, and A Dog of Flanders, after translating Mark Twain’s The Prince and the Pauper in 1927.
Childhood at Toyo Eiwa Girl’s School, which gave birth to Anne of Green Gables

Muraoka studied at the Toyo Eiwa Girl’s School, established by the female preacher of the Canadian Methodist Church (now United Church), Martha Cartmell, in Azabu Toriizaka. In her essay book Ikiru to iu koto, she presents her sensitive childhood, which is reminiscent of Anne of Green Gables in how she describes the atmospheric sight of the gas lamps when they were lit at dusk, and how she shared the large sweet she bought at a confectionery in Azabu Juban with her roommates.

Muraoka is known as a scholar of children’s literature by her translation of Anne of Green Gables, but she was in charge of the radio show Kodomo no Shimbun (Children’s Newspaper) on Tokyo Broadcasting Corporation (now NHK) in Mt. Atago, and she was also affectionately known as “Auntie Muraoka.” The show lasted from 1932 until the beginning of World War II in 1941.