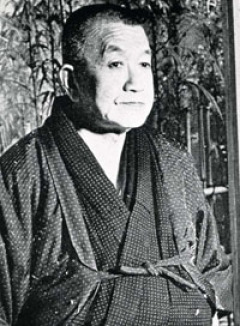 1886-1960. Poet, playwright, and novelist. Yoshii joined the Shinshisha, headed by Tekkan Yosano, and published his short verse Myojo (Morning Star). In 1908, he formed the Pan no Kai, which became a base for the aesthetic school, and published many plays after launching Subaru with Takuboku Ishikawa under the editorship of Ogai Mori in the following year. He is also known as the lyricist of Gondola no Uta (Gondola Song), which is sung in the movie Ikiru (Living), directed by Akira Kurosawa.
Provided quality creative scripts to radio dramas

Yoshii was born in a large manor house overlooking the sea of Takanawa in Shiba Ward, and he spent his childhood there. He started to write short verses while attending school at Tokyo Furitsu Daiichi Junior High School and Kogyokusha Junior High School. He immersed himself in creating plays after reading the play Purumuura in the first issue of Subaru.

While drifting from Shikoku to Chugoku, Kyushu, and Kyoto, he joined the Radio Drama Kenkyukai with Kaori Osanai and Mantaro Kubota at the request of Tokyo Broadcasting Corporation (later NHK), which started broadcasting radio programs in Mt. Atago in 1925. In the same year, he released scripts for radio dramas, such as Saigo no Seppun (The Last Kiss), Gekijo Iriguchi no Hanjikan (Half an Hour at the Theater Door), and Kamome no Shigai (Dead Seagull). In 1927, his play Ame no Yobanashi (Night Stories in the Rain) about a traveling performer was broadcast as a radio drama. The story had a melancholic mood based on Yoshii’s experience of wandering around the country and achieved popularity among the fans of the dawn of radio.