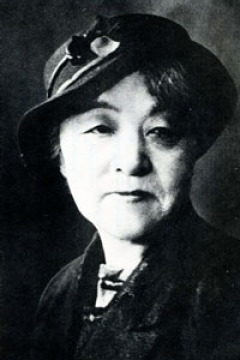 1861-1939. Painter. Tama was the second daughter of the manager of Zojo Temple in Shiba Sinbori and started to learn painting seriously under a Japanese painting master before entering elementary school. The Kobu Bijutsu School was established in 1876, and Tama studied oil painting from Ragusa, who was invited as a professor of sculpture from Italy, but the school closed down in 1882. Tama traveled to Italy with Ragusa and married him. She became the vice principal of an art school Ragusa opened in his hometown of Palermo, Sicily, and also worked actively there as a painter. In 1928, Ragusa died, and after a newspaper company in Japan found out about Tama and published a novel about her story, she returned to Japan in 1933. She changed her name back to Kiyohara in her last years and lived in her birth home in Shiba Shinbori.
Born in Shiba and studied Western painting

Shiba Shinbori, where Tama was born and spent her last years, is today around 2-chome Shiba. She enrolled at Ryuwa Elementary School near Kanasugibashi in 1872. The quarters of Ragusa, who taught her Western painting, was in Mita Koyama-cho (now 1-11 Mita). She died at the age of 78 in 1939 after returning to Japan, and she was buried in the Kiyohara family temple of Chogen Temple, where there is a memorial monument.